This post will explain how to avoid the endocrine disruptor bisphenol A, or more commonly known as BPA, which is a dangerous substance. Avoiding it is pretty simple; read on for the how-to! 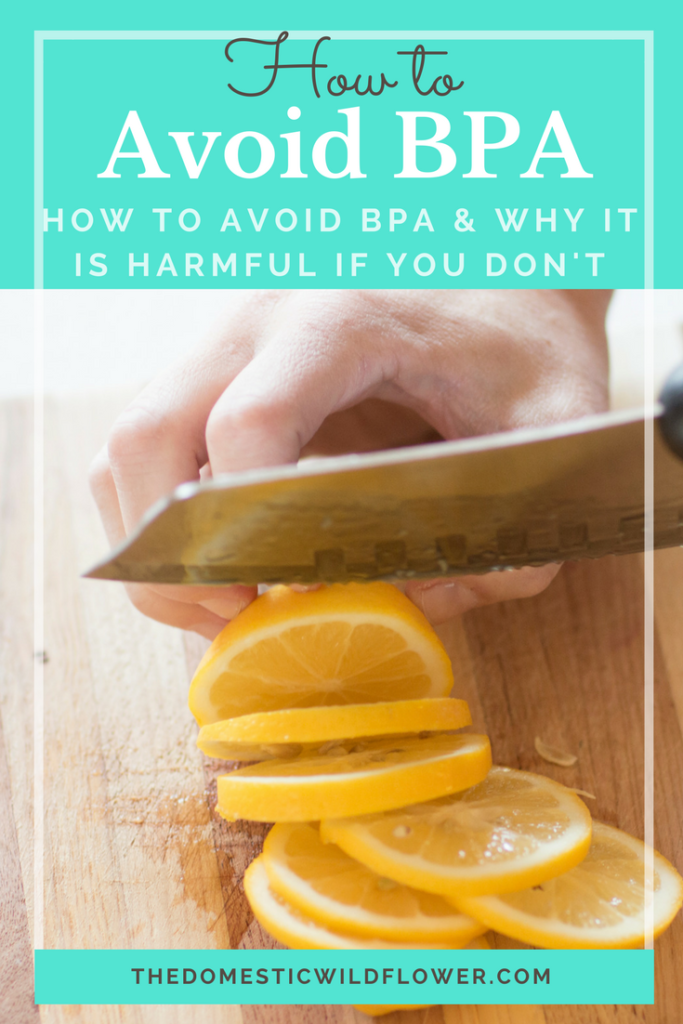 Ever since I was pregnant with my first child, I started to worry about health, whereas before, I couldn’t have been less interested.   As I read and learned, and grew larger and larger with my baby on board, I realized that since I hold no science degree, have just limited time, and really am not qualified to read and genuinely understand lengthy scientific journal articles and thus make solid conclusions, I was in a tight spot. In order to avoid some of the scary, or at least uncertain ingredients you buy with the prepacked everything at the grocery store, a person would have to spend a TON of time reading, researching, vetting, and otherwise fretting to determine if what they or their children were about to consume was dangerous or not.

For me, the solution was deciding that I would do my best to just buy and consume fewer prepackaged foods.

I’ll pause right there and fully, wholeheartedly admit that I am far from packaged-food free. There are a great many foodstuffs that I buy in a package- I haven’t the desire or time to make EVERYTHING we eat at home from scratch. I wouldn’t expect you or anyone else to either, but my goal with this post is to show you one way to reduce one avenue of BPA consumption. I’m not an all-or-nothing girl. Rather, I am a one-step-at- a-time mama. Step with me!

I came across a great article from Mother Earth News that was fairly easy to understand and outlined one major issue that I knew I could address, and help you address also.   The article explained that BPA (bisphenol A), an endocrine disruptor which is linked to several cancers, obesity, ADHD, infertility, and type-2 diabetes, is commonly used in the plastics used to package foods.   You probably already knew that, or had a rough idea anyway, that BPA is bad, and it is used in plastics that often are in contact with food.   You also probably have noticed that there are a great number of grocers and companies claiming they carry foods in packages that are “BPA-Free” which sounds really nice.

The trouble is, that as Mother Earth News explains, BPA-Free doesn’t actually mean it is safe, or that it is actually free from BPA.   The findings of the study were “alarming” and explain that, “67 percent of the cans tested (129 out of 192) contained BPA-based epoxy in the body and/or the lid.” Furthermore, “BPA was found in private-label cans sold at both Target and Walmart, the largest grocery retailer in the United States. In their private-label products, 100% of Target cans (5 out of 5), and 88% of Walmart cans (7 out of 8) tested positive for BPA-based epoxy resins. Our survey revealed that neither of these two major retailers has policies in place to eliminate BPA in canned food, unlike competing grocery retailers.” 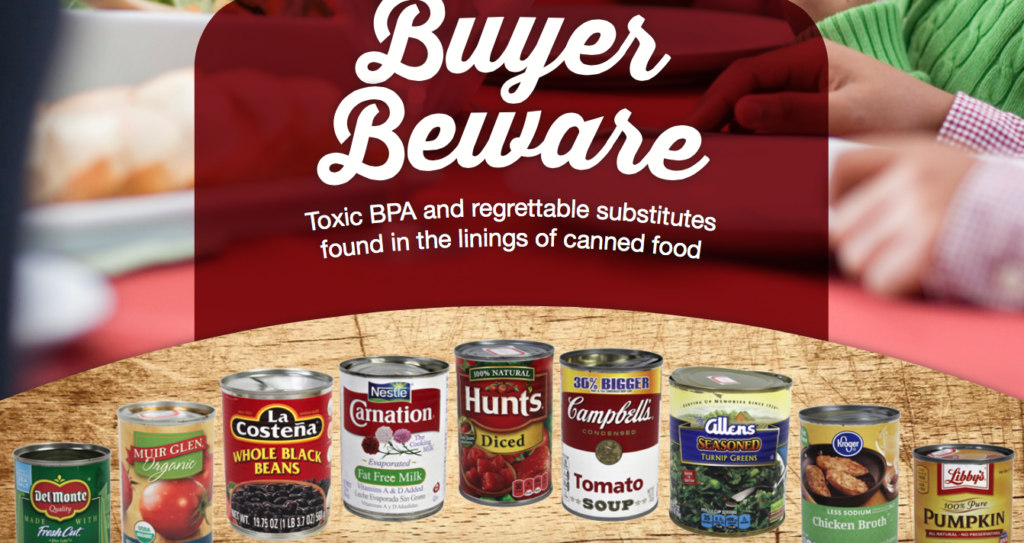 “Discount retailers (commonly known as ‘dollar stores’) were among the laggards in transitioning away from BPA in can linings. Our testing revealed that 83 percent of Dollar Tree and Family Dollar private-label cans (5 out of 6) and 64 percent of Dollar General private-label cans (9 out of 14) were coated with BPA-based epoxy resins. This is espe- cially a problem because discount retailers are often the major retail outlet in low-income communities—which already face the highest levels of BPA exposure.” That’s pretty darn alarming, right? The study did find some bright points, as “Amy’s Kitchen, Annie’s Homegrown (recently acquired by General Mills), Hain Celestial Group and ConAgra have fully transitioned away from the use of BPA and have disclosed the BPA alternatives they’re using. No BPA-based epoxy resins were detected in any of the cans tested from these brands.”

Unfortunately, that’s about all the good news from the study.

The types of linings of cans in the store are numerous, and I’ll directly quote the words of the study from www.toxicfoodcans.org to explain. “Five major coating types were identified among the 192 cans tested: acrylic resins, BPA-based epoxy, oleoresin, polyester resins, and polyvinyl chloride (PVC) copolymers. We know very little about the additives used in these compounds to give them the properties that make them stable and effective can linings. Our research does demonstrate that there are multiple formulations of most of these compounds, but there is no way to determine the specific chemicals used or how they are produced.”   Currently, there is NO WAY TO DETERMINE the specific chemicals. The study goes on to say “18% of retailers’ private-label foods and 36% of national brands were lined with a PVC-based copolymer. This is clearly a regrettable substitute, because PVC is a polymer made from vinyl chloride, a known carcinogen.”

The other take away that I think is the most powerful for you, busy reader, is that, “93 percent of Americans tested have detectable levels of BPA in their urine, suggesting that people are consistently exposed and re-exposed to BPA through the chemical’s presence in foods and from other sources.”

If you’ve just skimmed so far here’s the Wildflower’s Digest version: BPA is bad because it is linked to some pretty scary things like cancer. BPA is a plastic (though hard to see) liner inside cans of store-bought food. There are other BPA-like substances (also linked to causing cancer) that are called “BPA-Free” that also line many food cans. Eating foods packaged in cans lined with BPA or BPA-like substances leads to the consumption of BPA.

Here’s how I do my best to avoid this problem.

I learned how to can. Not very glamorous but 100% true. Canning has a really lame reputation as being old-fashioned (it is so cool!), dangerous (definitely not & absolutely not as dangerous as BPA!) time consuming (I’ll all about efficient & fast) and difficult (easy!). On my blog, I share a wide variety of tutorials about all manner of handmade & homemade food & craft education but canning is the one thing that benefits me day after day.

I’d like to invite you to jump start your desire to eat more healthy foods. Join the Healthy Meals Quicker Challenge and in 3 days you will be ready to start canning and avoid BPA! 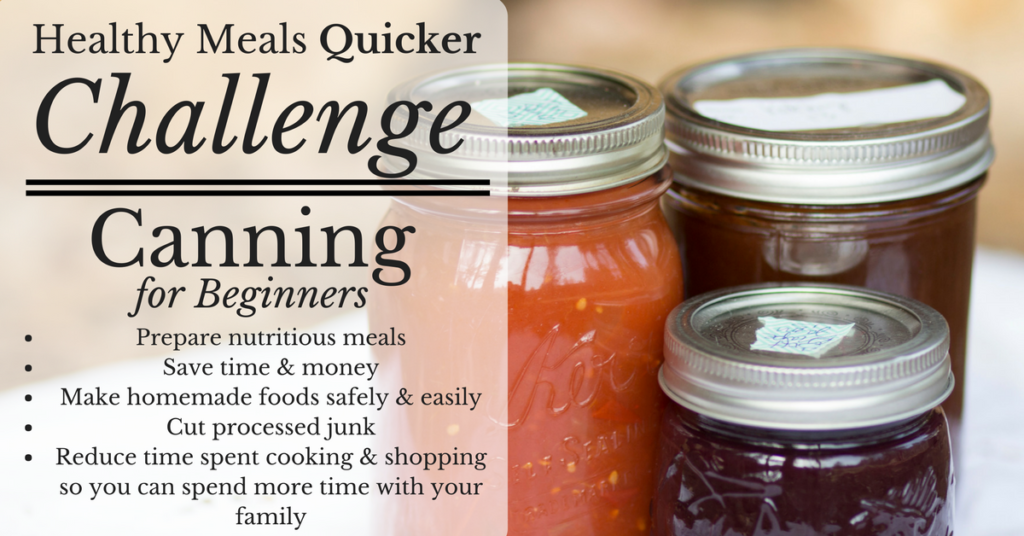 It might be easy for some to stop by the farmer’s market every few evenings to grab the fresh produce you plan to eat but let’s be realistic, shall we?

You are super busy.

Most of us don’t live in the salad bowl of the nation where produce is growing and fresh in stores 10 months of the year. Lots of us have pretty slim pickings at the grocery store October through March, if not longer.

The produce that is available in the store might have traveled a REALLY long ways to get there and might not taste that awesome as a result.

Canning is THE tool I use to preserve fresh fruits and veggies when they are fresh, inexpensive, and plentiful.

If the idea of preserving your own foods into clear glass jars (that are TRULY BPA free) has your interest, let me tell you a few things.

Canning can be fast– many batches of a dozen jars or more can be done in under an hour.

Canning is safe– we can only high acid recipes and techniques that are tested and proven by the USDA.

Canning is easy- Many recipes are just a few ingredients, and the process is SIMPLE once you’ve watched it a few times. I always say that I’d rather can every day of the year than cook a Thanksgiving dinner once.

Canning saves money– Imagine how much you’d save when you consider cutting food waste AND eating homemade. Canning doesn’t take a ton of equipment- you probably have almost every item you’d need already!

Canning saves time. An hour or two invested now means night after night of ready-made pasta sauce or wholesome salsa that is COOKED IN ADVANCE.

Canning makes it easy to eat healthy– there’s no added sugar in tomato sauce, or artificial ingredients, or imitation-fruit pieces. The foods you can still count as food.

Canning makes it easy to avoid allergens. I like to say that canning jars are clear both literally and metaphorically. You get to decide what goes in the jar and what stays out.

The satisfaction of opening a can of store bought canned food is that it is convenient. It seems cheap and easy. The flavor isn’t amazing, the quality is dubious, and after it is eaten it is probably forgotten.

The satisfaction of opening a jar of homemade pasta sauce you made yourself is enormous. The sauce is wholesome, flavorful, fragrant, and delicious. Imagine if you canned your own jam. Would you forget about those jars of goodness on the shelf and waste them? Toss the jar out with a spoonful left inside? No way! Every bite is savored and enjoyed.

Giving canned foods is the ultimate way to show your appreciation for a loved one. It bypasses the materialistic trap that most hostess gifts present and truly represents your gratitude.

I could go on and on about how canning is the ticket out stress city but I want to SHOW you.

I want to help you avoid BPA, eat healthier foods faster, and gain enormous satisfaction from canning your own produce. Join me in the 3 Day Healthy Meals Quicker Challenge! 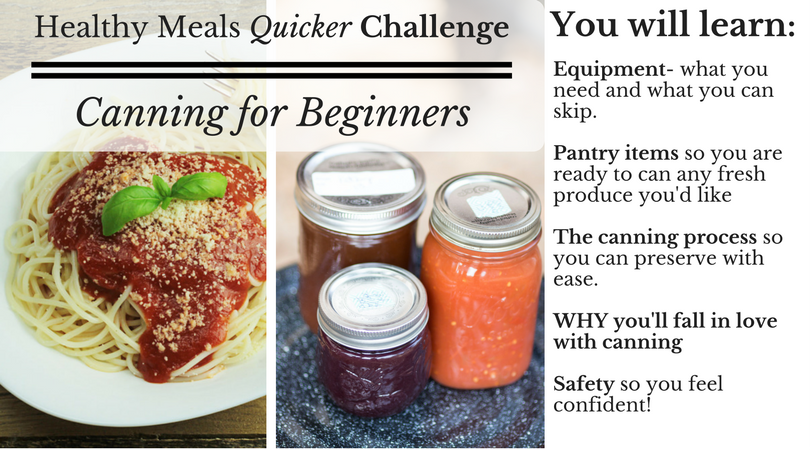 Still not convinced you should can? Take the quiz to find out! 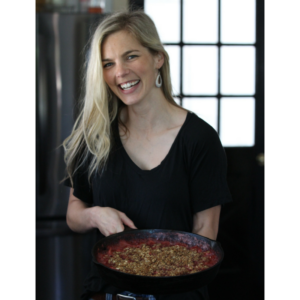 From simple shrubs to fresh fruit mixers to dozens of fun, easy cocktail and mocktail recipes, this bundle shares Everything Mixology; Cheers!

Healthy, homemade cocktails and mocktails begin with fresh, delicious mixers. You’ll master the techniques for making shrubs, bounces, infusions, and more in Everything Mixology. You’re getting a bundle of the

Cheers to drinks you’ll be proud to serve to guests and family!