You are here: Home / Cocktails / How To Make Shrubs Course 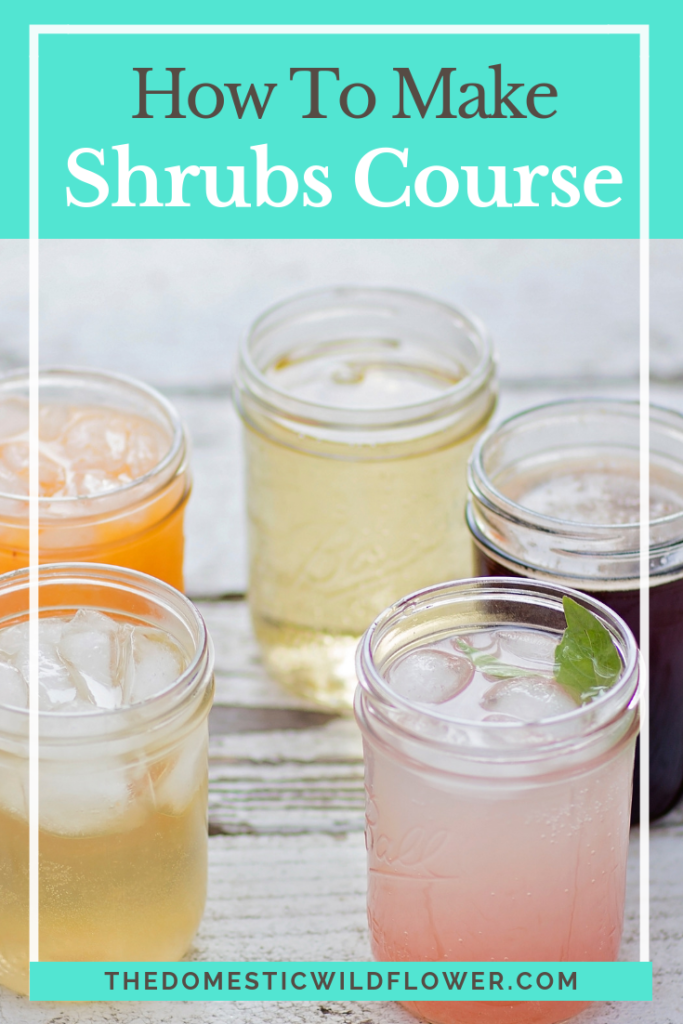 First of all, my devoted readers, I am sorry I haven’t posted a blog post in the last two weeks. I was sick, then my kids were sick, and really, I have been working like mad on some very fun and exciting projects that will be unveiled in the next couple of weeks. I truly didn’t have time to do much beyond the behind the scenes work I was tackling in between bouts of the flu. We are all healthy, happy, thinking about Santa, and back to normal. I am looking forward to revealing several awesome resources for you but the first of which is the new & improved, free, shrubs email course.

Shrubs were invented in the Colonial era as a way of saving the bounty of the harvest; fresh fruit was preserved (aka saved for later, when it wasn’t growing on the tree, plant or vine) in vinegar and then used as an astringent add-in to water that may or may not has been all that clean to drink, given the absence of sanitation measures. I spent a year teaching Social Studies a couple years ago, (I normally teach English) and enjoyed (note: sarcasm) explaining to my junior highers about how many colonies darn near died out from dysentery, which is basically terrible diarrhea from drinking dirty water. Yucky, but true. Historically, waterborne illness encouraged the creation and consumption of a great many beverages that were safer to drink than plain water, like beer, shrubs, and other liquids that were inhospitable to bugs that are likely to make us sick.

They were revived during the Prohibition era in the US. Alcohol was banned in a variety of states and manners, off and on, during the 1800s as it became clear that the overindulgence of alcohol caused a lot of problems for families. The 18th amendment was ratified in 1919, by which time about 33 states had independently banned alcohol as well. Of course, enforcing the prohibition of alcohol effectively in more rural areas (as poorer folks were less like to be able to afford expensive bootlegged spirits) and less so in urban ones. Overall, those who wanted to drink found ever more inventive ways of drinking; moonshine, speakeasies, and bootlegging all were means to a tipsy, and criminal end. Al Capone, a famous Chicago gangster, supposedly earned $60 million a year from bootlegging, or illegally brewing and distributing, illegal alcohol. In short, Prohibition failed to reduce drinking, crime, or drunkenness, and Franklin D. Roosevelt called for the repeal of the 18th amendment on his election platform and easily won the election. In February of 1933, the 21st amendment repealed the 18th, and alcohol was legal once more.

During Prohibition, the housewife and homemaker were faced with the great question of what to serve guests who came calling. The book, “What To Drink” by Bertha E. L. Stockbridge, 1920, is one that is filled with creative, frugal, and sensible ideas of how to quench the thirst without alcohol. Remember, the Great Depression began in 1929, so Prohibition straddled the end of the Roaring Twenties and the beginning of the depression. The lack of legal alcohol coupled with the lack of disposable income resulted in a revival of shrubs, also known as drinking vinegar, and a great many other drinks.

What is a shrub?

Shrubs are a syrup made with fruit (which spoils rather quickly without refrigeration), sugar or honey, and vinegar. Vinegar is very high in acid, and acid is one way we can make food and drink a place where germs that make us sick cannot thrive. Sugar is a powerful preservative, which is one of the reasons a gummy worm doesn’t rot away when lost under a car seat the way a slice of bread will. The combination of sugar and vinegar means that fresh fruit flavor is preserved in a concoction that will last much longer than fruit left whole. It also made an astringent addition to water, which by Prohibition was a lot cleaner in general, but still was a concern in some areas, or times, as the end of summer when wells were lower, etc.

Nowadays, we know a lot about the health benefits of drinking vinegar. The darling of the vinegar world currently is apple cider vinegar, the same way the gem of the wine industry is red wine. Generally speaking, vinegar is vinegar, they way darkly colored alcoholic beverages are all darkly colored alcoholic beverages. Dark beer has many of the same health benefits of red wine, just better marketing has been done on red wine’s behalf. The same goes for apple cider vinegar.

At any rate, there’s oodles of information out there on reputable sites about the health benefits of apple cider vinegar specifically, and generally, incorporating vinegar of all kinds into the diet. Vinegar lowers the appetite, speeds up metabolism, reduces inflammation, among other desirable actions. Indeed; consider the diets of many places known for maintaining great health. The Mediterranean diet enjoys balsamic, the Asian diet enjoys rice vinegar, and so on. I’m not saying vinegar is a silver bullet cure-all, I’m just saying it is probably a good thing to incorporate into our diet.

The main opposition I have found to making or drinking shrubs is that people say they don’t like vinegar and they assume that drinking shrub means you are just guzzling plain old white vinegar. Not so, Wildflowers. White vinegar is good for descaling the dishwasher, whitening white laundry, and cleaning windows in my home, NOT for use in shrubs. For one of my very first shrubs I used plain, cheap white vinegar, the very same stuff I use to clean with, and blueberries and there’s no amount of sugar or fruit in the world that will make that taste better.

What IS good, however, is apple cider, balsamic, champagne, rice, and other milder vinegar. THOSE are the hot ticket. The second piece of growing to love shrubs is to understand you usually don’t drink them straight. The recipes in the Prohibition era cookbooks call for just a spoonful of shrub in a glass of cold water. I drink mine with about a shot of shrub, which is just 1-2 ounces, in a 16-ounce wide mouth pint glass, filled with water and a shot of alcohol if the day called for it (a junior high field trip day calls for 2). So, you really aren’t drinking plain vinegar at all, unless of course that you want to. The flavor that I have read enjoyed straight the most is apple shrub, which is a freshly grated apple submerged in apple cider vinegar.

Shrubs are not a fermented concoction. They delicious without the addition of alcohol and all my recipes make it clear that you don’t have to add a shot of booze at all to enjoy them. Most days, I skip the alcohol just to keep my pesky migraines at bay.

All of my shrub making instructions are no-cook. That means there’s no saucepan to heat up, no dishes to scrub clean..NO cooking. Many recipes of yesteryear gave instructions for boiling fruit and sugar together but what is lost is that delicious fresh fruit flavor. I prefer to let the fruit and vinegar sit together to marry, and then add the vinegar. I suppose what I’d be gaining is time if I chose to sacrifice the taste of a perfectly fresh, ripe apple for the 10 minutes of cook time. 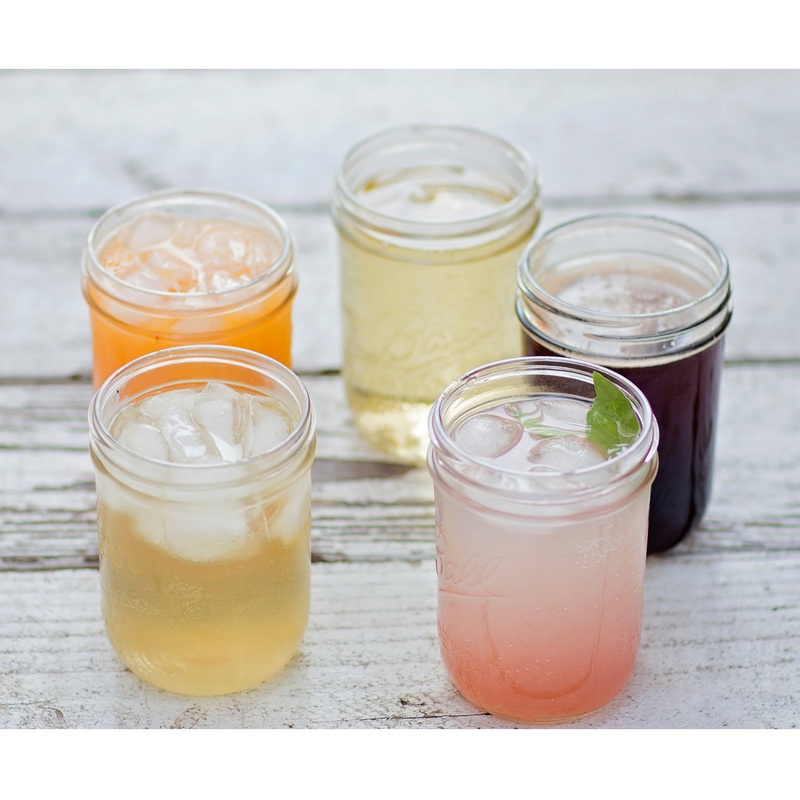 I’m sharing this post now so you can learn how to make these in case you are like me a few years ago in regards to being an underprepared and uninspired hostess.
I love my family and friends but I wasn’t raised in a home that enthusiastically welcomed the idea of having gobs of company over. My mom, who taught me how to be a hard worker and where I get my hustle and height, was a waitress for many years. She was a good, fast, efficient, tip-making machine but that’s not quite the same thing you want to be when having your new in-laws over for supper, right? I wanted to be like the gal on the cover of a magazine, pouring pretty drinks in a white kitchen where something was peacefully baking out of sight and there were never any dishes to be washed. Learning how to make simple, economical, and unique drinks like shrubs can take you one step closer to the cover of that metaphorical magazine. You don’t have to rely on some tired old choice from the grocery store shelf. Your best friend’s brother’s new girlfriend who will be over for drinks has already had that margarita mix a dozen times. That mixer would be okay and no more.

Sign up for my free shrubs making email course and you will be on your way to serving fresh, fun, and unique shrubs this season!

Maybe shrubs are a mixer you’ve mastered, and maybe you want to try something fresh and new. I am in that boat, and when I found this amazing graphic, I was in cocktail love. I hope it helps inspire you to fill your mason jar with something farmer’s market fresh, on the double, Wildflowers! 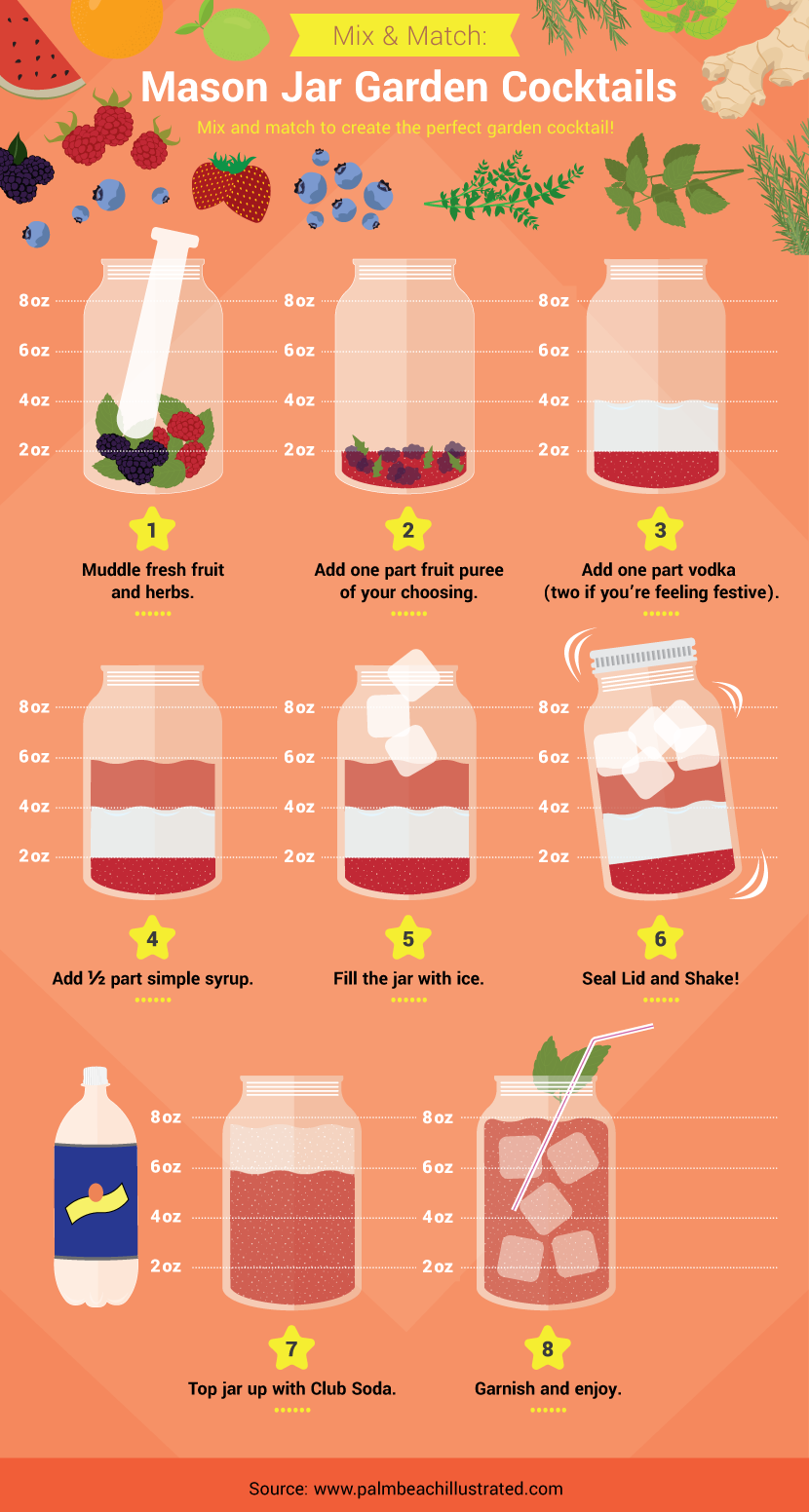